What we do: stop fracking

With more than 90% of the Territory covered by gas licenses, the NT is under serious threat from hydraulic fracturing, or ‘gas fracking’. Gas, like coal, is a polluting fossil fuel that is wrecking our climate.  We absolutely should not be looking for new gas.

Fracking is an expensive, dirty and dangerous way of extracting gas from layers of shale deep under the ground. The process requires millions of litres of water, hundreds of tonnes of chemicals and proppant. Drilling for gas destroys our environment, farmlands and cultural landscapes and threatens to contaminate our groundwater supply.

Gas is a job-poor industry and won’t help lower electricity prices.  Despite this, successive NT governments have spent $94 million of public money subsidising the onshore oil and gas industry over ten years [1].  Publicly funded gas infrastructure will become stranded assets in a world that is rapidly moving toward renewable energy.

ALEC has campaigned to stop fracking in the Northern Territory since 2011, and continues to campaign to block the development of the Beetaloo sub-basin and associated pipelines across the NT.  Fracking the Beetaloo would increase Australia’s total emissions by up to a 22 per cent - fuelling climate disaster.

Across the Territory, the transition to clean energy offers the opportunity to create thousands of skilled local jobs, lift communities out of energy poverty, and power the revitalisation of remote and regional economies. ALEC advocates for a just transition to 100% renewable energy to ensure a liveable climate and safe future for all.

Learn more about our campaigns to stop fracking: 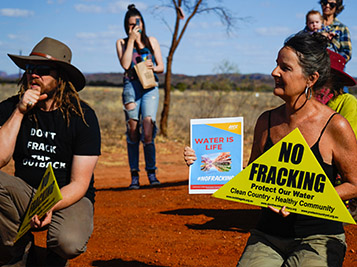 In 2020, the Morrison Government unveiled plans for a ‘gas-fired’ recovery and over $200 million in subsidies for polluting companies to exploit the Beetaloo Basin.  Our campaigning and advocacy aims to keep public pressure on Territory politicians, with the goal of blocking fracking in the Beetaloo (currently in exploration phase), and ensuring no new areas in the NT are opened up for exploration.

Communities in the NT are in firing line of fracking and the risk this dangerous practice poses to precious groundwater, while the emissions associated with fracking puts all Australians at risk. ALEC works alongside these local, regional and national organisations in the campaign to stop fracking.

The Lock the Gate Alliance is a national grassroots organisation made up of over 120,000 supporters and more than 450 local groups who are concerned about risky coal mining, coal seam gas and fracking. These groups are located in all parts of Australia and include farmers, traditional custodians, conservationists and urban residents.

The Protect Country Alliance brings together impacted landholders, communities, and civil society groupsconcerned about gas fracking proposals or projects in the Northern Territory. The Alliance is made up of delegates representing regional communities across the NT including; Elliott, Marlinja, Minyeri, Borroloola, Mataranka, Jilkminngan and Hermannsberg.

'No role for new gas': joint submission to the Gas Fired Recovery Plan

No plan to offset carbon bomb

Red carpet rolled out for gas, waste of taxpayer funds