Why we going to court over Singleton

Why we're taking the NT Government to court over Singleton

We’ve taking the Minister for the Environment to court over the Singleton Station water licence. The licence will destroy huge swathes of groundwater-dependent ecosystems across a vast arid area. It is too big to be sustainable and must be overturned.

In November 2021, following a Ministerial Review, the government re-granted a licence to Fortune Agribusiness to extract 40,000 billion litres of water a year for 30 years for free at Singleton Station.

Please make a donation to support ALEC to protect water and stop Singleton.

ALEC is arguing that the decision to approve the largest groundwater licence in the history of the Northern Territory is unlawful and must be overturned (read our media release about the case here).

The water allocation plan for the area covering Singleton Station sets out binding provisions designed to protect groundwater-dependent ecosystems (GDEs) from the impacts of new developments and extractions.

Notably, extraction that causes the water table to drop in excess of 15 metres below ground level is prohibited. Yet modelling shows that Singleton could lower parts of the groundwater table by 50 metres over 30 years.

Investigations reveal no other party was consulted about the rule change except the licence proponent themselves, Fortune Agribusiness. ALEC, the Central Land Council and other impacted parties were not consulted.

This licence is completely inconsistent with the sustainable development of our water resources. Represented by the Environment Defenders Office, we argue that it was a legal error to rely on these guidelines to approve the Singleton water licence and the decision must be overturned.

Lowering the groundwater table by 50 metres will have detrimental and potentially irreversible impacts on groundwater-dependent ecosystems including Aboriginal sacred sites such as water holes and soaks.

The licence is simply too big to be sustainable and sets a dangerous precedent for the ongoing industrialisation of water resources in Central Australia and the Northern Territory.

The scale of this water licence cannot be understated. By comparison, the 10 largest groundwater licences in NSW range from 7GL-15GL. Singleton gives away 40GL per year for 30 years – for free. 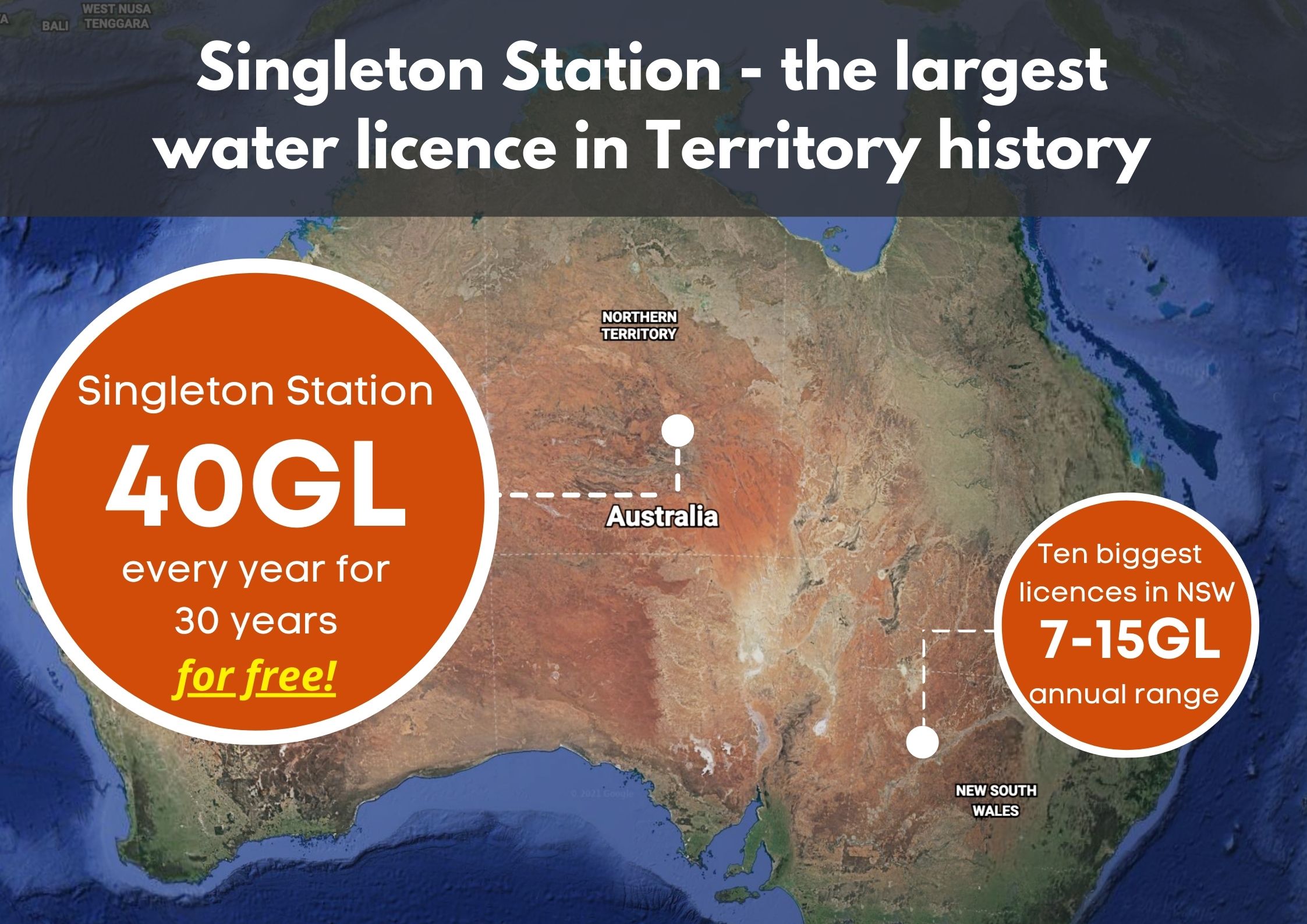 Development over sustainability, or good sense

The Gunner Government has adopted a goal of a $40B economy by 2030 and is recklessly granting large volumes of water to agribusiness as part of its plan for economic reconstruction.

There is little evidence to support the notion that a free water licence to develop one of Australia's largest fruit and vegetable farms in the arid zone with crops destined for export will bring major benefits to Territorians.

The Government is proving they will pursue an agenda of large-scale irrigated agriculture, whether or not this can be done sustainably and without irreversibly damaging a precious water resource that sustain so many livelihoods.

Singleton is a symptom of failing water laws

The Environmental Defenders Office found Northern Territory water laws to be some of the weakest in the country. Perceived conflicts of interest, poor governance arrangements and excessive discretionary powers pervade the current regime for granting licences over our most precious resource.

Until the major flaws in our water laws are adequately addressed, independent scrutiny from organisations like ALEC, the ECNT and EDO over water licensing decisions such as Singleton is crucial and in the public interest.

As well as fighting to overturn the decision to grant the Singleton Station water licence, ALEC is calling for an independent water regulator to be established which assumes all responsibilities currently undertaken by the NT Water Controller to improve transparency and restore confidence in water licensing decisions.

We need a stronger and more transparent process based on rigorous scientific assessment before water licences are granted to protect the health of our ecosystems and ensure drinking water for future generations.

Donation to support the campaign to stop the Singleton Station water licence and fix our failing water laws.

The government can earn back our trust as a regulator and fix our failing water laws.

Our water regulatory system is failing in the Northern Territory