Reflections from the recent senate inquiry 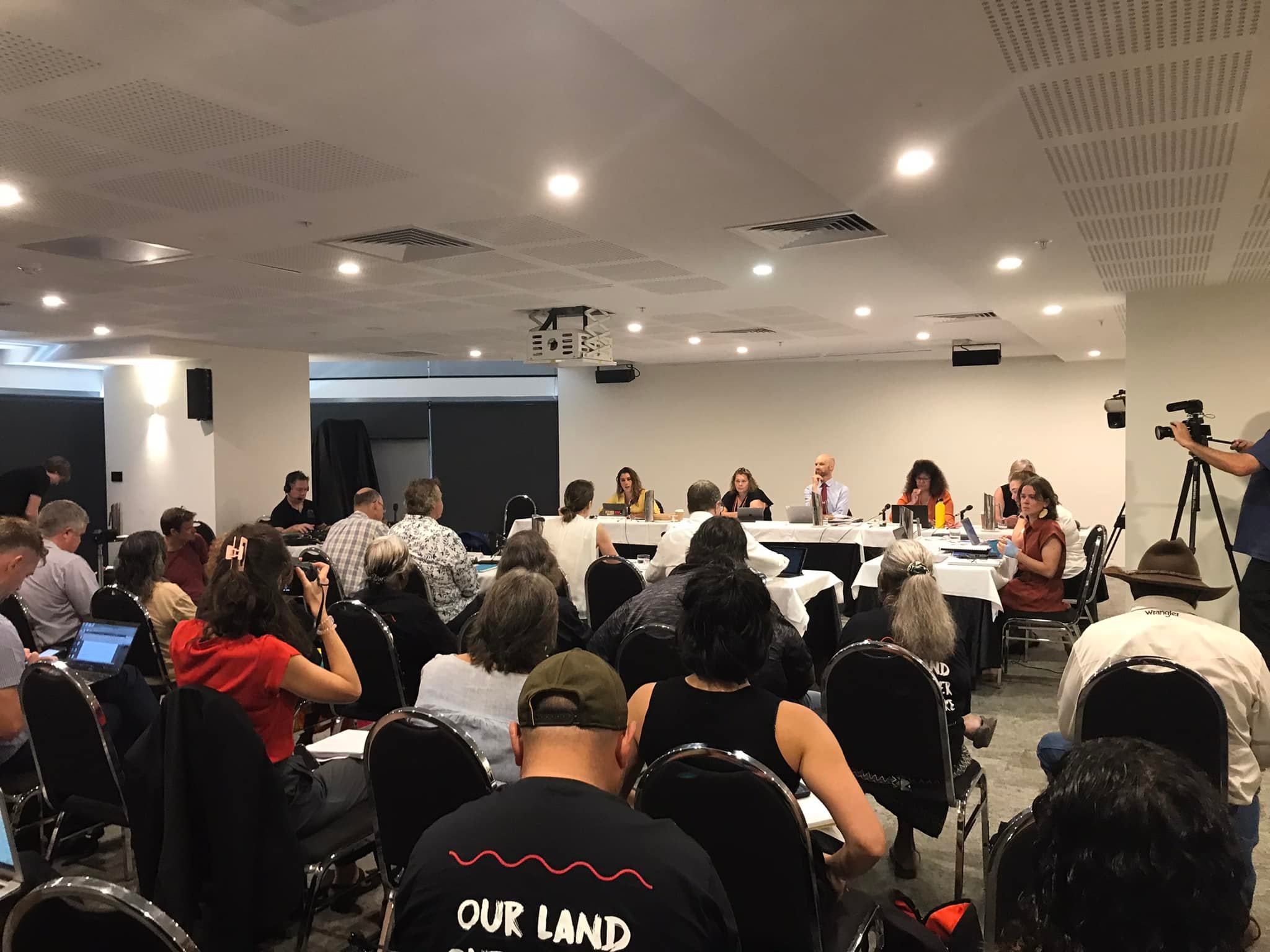 Last week the senate inquiry into fracking in the Beetaloo basin, Northern Territory came to Darwin. The senate inquiry was originally formed to examine the validity of a controversial $22 Million dollar grant given to Empire Energy, an oil and gas company operating in the Beetaloo Basin with strong links to the federal liberal party. However it has become a much broader forum on this deeply unpopular shale gas industry and its attempts to get off the ground in the NT.

People came to Darwin from across the territory, often travelling hundreds of kilometres by road from the affected region to testify and put their opposition to fracking on the record. The chance to be heard directly by federal decision makers is very unusual for people in the NT, particularly those in remote bush communities, and there was enthusiasm for the chance to speak directly back to ‘gas fired recovery’ narratives that circle in far away corporate HQs and parliamentary press conferences. The hearing room was packed, people sitting on the floor in awkward corners or standing in the corridor to try to listen to what was being said.

The balance of power in the room was also motivating. This inquiry hearing was chaired by Yamatji-Noongar woman Dorinda Cox, the greens spokesperson for mining, and the panel included the outspoken DjabWurrung Gunnai Gunditjmara women and greens senator Lidia Thorpe and  NT Labor senator Malarndirri Mccarthy who is directly related to some of the Yanyuwa, Garrwa & Marra nations of the country affected by fracking and has been a key advocate on this issue for many years. These three strong First Nations women outnumbered Country Liberal Party Senator Sam McMahon, trying to push the gas industry’s line. The panel felt like a window into how different government could be if competent and compassionate First Nations women like these three held the balance of power.

Lidia Thorpe opened the inquiry by challenging Australian Petroleum Production & Exploration Association CEO Andrew McConville on his acknowledgement of country, asking what that could mean to him. His somewhat confused response was that no production of oil and gas would happen without Traditional Owners consent, something echoed by the two major companies active in the Beetaloo, Origin and SANTOS when questioned later. This is interesting given that there is no legal veto right for Traditional Owners when it comes to moving from “exploration” - the current stage where companies are drilling and fracking to look for gas to “production” where they scale up massively and sell it, despite repeated calls for reforms to enshrine this veto right.

Highlights of the day were testimonies from Nurrdalinji Chairperson and Beetaloo Traditional Owner Johnny Wilson, who lives 20 kms from Empire Energy’s exploration wells  expressing his deep concern “for our Country, our water, our sacred sites, and our cultural heritage, which we know will be damaged if fracking goes ahead” and Pierre Langehoven, owner of 2 Cattle stations in the affected area’s headline making statement that Cattle and gas are incompatible.

This senate inquiry cannot stop fracking in the NT, however there is a real power in hearing directly from affected communities, and it was so energising for everyone in this fight to hear from other allies and to know that they are not alone, traditional owners, pastoralists, environment groups, and the broader Territory community are united in opposition to fracking, and this is already giving the industry big headaches and threatening it’s ability to get off the ground, no matter how much tax payer money the federal government throw at it.