ALEC is focused on efforts to prevent the proposed Amadeus to Moomba Gas Pipeline (AMGP) from getting off the ground.

The Amadeus to Moomba Gas Pipeline (AMGP) is a joint venture led by Central Petroleum in collaboration with Macquarie Group and Australian Gas Infrastructure Group/CK group (a Hong Kong-based energy infrastructure investor).  It is planned to be a 950km pipeline, up to 16-inch in diameter with free-flow capacity of 124TJ per day.

The AUS$1.2 billion project would require significant public subsidy to be financially viable and project partners are eyeing federal government financing support via the Northern Australia Infrastructure Facility.  The consortium is aiming to reach a final investment decision (FID) by the end of 2021, begin construction by early 2022 and have the pipeline operational by 2024.

Impact of the pipeline on gas fracking in the NT

However, in reality the pipeline would only be viable if it were to transport fracked gas, most likely from the Beetaloo Basin. The feasibility study commissioned by the Federal Government in 2017 stated a likely scenario would be that the pipeline transported up to 90 per cent in fracked Beetaloo gas.

This pipeline would increase the viability of development in remote areas of the Simpson Desert including the Pedirka Basin, where Texan gas company Tri-Star, known for being the first company to engage in Coal Seam Gas extraction in Queensland, have been buying up leases in South Australia and the NT in recent years and have an exploration well at New Crown Station on the North West edge of the Simpson Desert.

The AMGP is an extremely expensive and logistically challenging project which would traverse remote ecologically and culturally sensitive sandune country and floodout regions.

Preventing the AMGP from receiving a positive final investment decision will be critical. 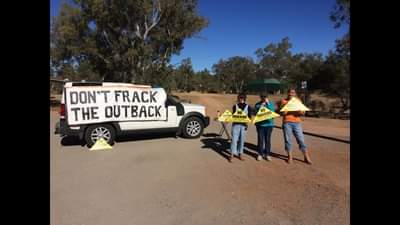