The Northern Territory Government has approved the largest water licence in Territory history – 40 billion litres per year for 30 years. The impact on native plants, animals, sacred sites and community drinking water will be disastrous, and potentially irreversible. ALEC, alongside others, are fighting to #StopSingleton.

ALEC challenged the NT’s largest ever groundwater licence on legal grounds, represented by the Environmental Defenders Office.  Read our submissions to the Review Panel here.

The threat to our most precious resource

Water is life in Central Australia. Communities and ecosystems rely on healthy aquifers and an ongoing supply of fresh water.

When the Water Controller approved the NT's largest ever water licence in April 2021, Traditional Owners, environmental groups and the wider public were outraged.

The Government approved the licence based on very little scientific data and without knowing the full impact this unprecedented water licence will have on water resources, and all forms of life that depend on them.

ALEC is concerned that the licence sets a worrying precedent for the industrialisation of our water resources, to the detriment of country and community.

The government was prepared to approve the largest groundwater licence in the history of the NT on the basis of rudimentary modelling, limited knowledge about impacted aquifers, incomplete studies into culturally significant ecosystems and no EIS.

We therefore have no confidence that the government will do anything other than continue to tick boxes to allow this development to continue, regardless of the impacts.”- Dr Emma Carmody, Environmental Defenders Office Managing Lawyer.

The potential impacts from this development are huge, and include:

We say no to Singleton

ALEC challenged the Government’s decision alongside other groups including the Central Land Council, Environment Centre NT and CentreFarm Aboriginal Horticulture.

On September 3, ALEC appeared before a secretive Ministerial Review Panel to make our case against the licence. Represented by the Environmental Defenders Office, ALEC argued the water licence was granted on unlawful grounds.

Read our submissions to the Review Panel here.

If this decision is not overturned, it will lock in an incredibly unsustainable development in an arid region and compromise the future health of this aquifer and its culturally significant groundwater- dependent ecosystems.” - Dr Emma Carmody, EDO. 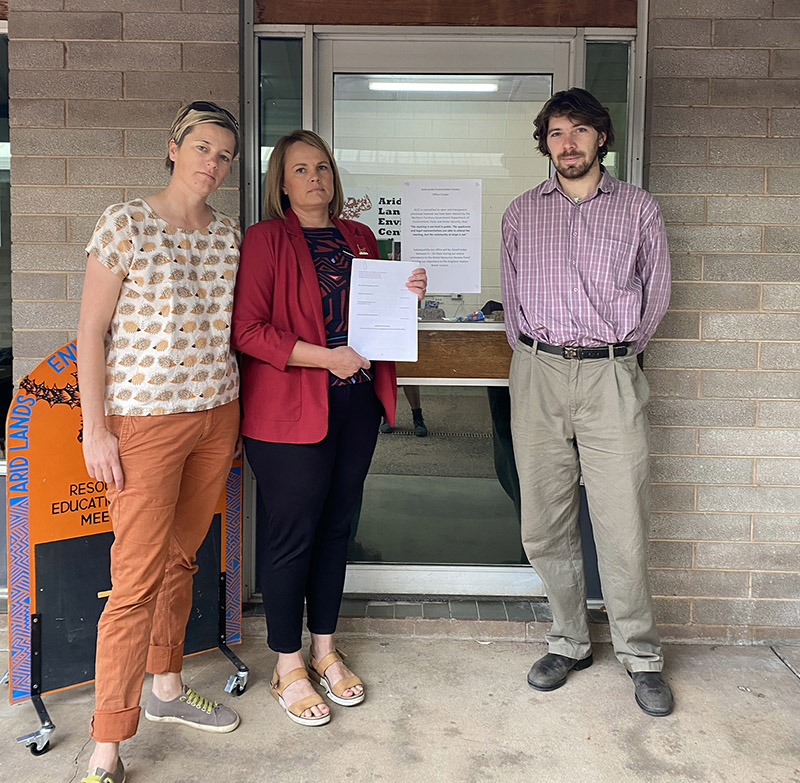 What can be done right now?

We need your help in continuing to put public pressure on decision-makers about this licence.

We urge you to pick up the phone and make a quick call to the Environment Minister’s office and the Chief Minister's office to raise your concerns.

A water licence of this size would have a significant impact on the environment. Traditional Owners and the Central Land Council continue to voice strong concerns. More than 21,000 people have signed a petition opposing the licence.

We all need to take action to help resist this decision. You can help by phoning Minister Lawler and the Chief Minister's office and leaving a respectful but strong message against this decision.