2020 was a turbulent year, there is no question about that. The pandemic transcended virtually everything, including sparking greater awareness of the link between human health and planetary health. Despite setbacks, the ALEC community, alongside other groups, continued to push for strong environmental action in Central Australia and across the Territory.

From achieving bipartisan support for renewables at the NT election to bringing together delegates at the climate justice summit to smashing the fundraising target in two weeks to help fight fracking and recruit a local campaigner, our united efforts mean we are having a big impact.

Thank you to everyone who supported ALEC in 2020 and helped to make these outcomes possible. Together, we managed to achieve big things even through lock down and with a small team. As ALEC starts the year with a full complement of staff, we look forward to continuing to take action with you in 2021 to protect biodiversity, step up climate action and build healthy futures for arid lands and people.

At the summit: climate justice in the NT 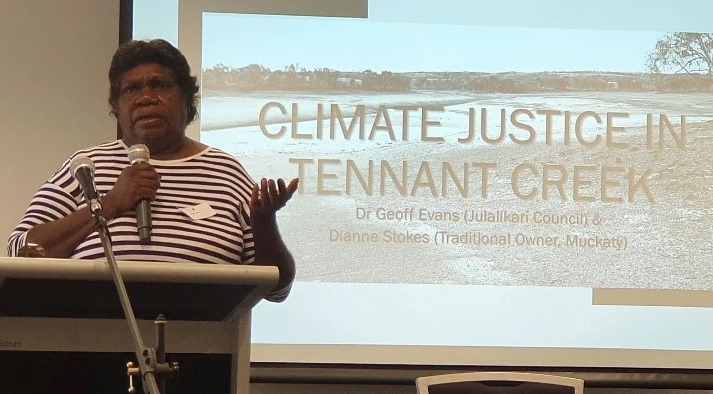 More than 100 delegates from across the Northern Territory gathered in Mparntwe (Alice Springs) in March to commit to transformative actions that respond to the climate crisis and create a just and sustainable future for our communities.

ALEC was one of several organisations involved in organising the NT Climate Justice Summit. We committed to responding to these challenges collectively, centring justice at the heart of all climate solutions. Together, we developed the Climate Justice Statement outlining the key policy directions that can provide just and equitable solutions to the climate challenges facing Northern Territory communities. 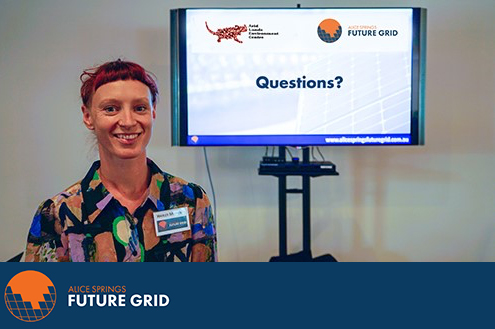 Alice Springs Future Grid is a 2-year project focused on removing barriers to further renewable energy penetration in the Alice Springs power system. Future Grid will look at how battery technology can help stabilise the grid, reducing the reliance on gas generation and help us to reach 50% renewables by 2030.

This is a ground-breaking project and ALEC is proud to be part of the collaborative Future Grid effort. 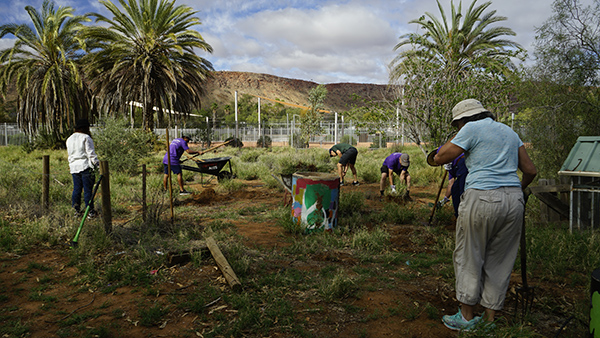 What's the first thing to be done when starting a new garden? Get rid of the buffel and make a hot compost of course!In 2020, ALEC announced the start of a new community garden, made possible through an MOU with Centralian Middle School and the NT Community Benefit Fund. We're excited to work together with local organisations to meet the growing demand for local produce, the knowledge of how to grow it, improve local food security and enhance community wellbeing.

Follow the Facebook page to connect with the garden, our community, working bees and workshops. 2021 is going to be a big year for the Westside* garden. Stay tuned for details. *working title

The Indigenous Desert Alliance Conference, held during NAIDOC Week, brought rangers across the desert together (virtually!) to connect, story tell, learn and share knowledge. Gareth Catt from the 10 Deserts Project led discussion with the Oak Valley Rangers and Muru Warinyi-Ankkul Rangers in Tennant Creek about what they're seeing out on country due to changing climate and we heard the BREAKING NEWS that Parna Ngururrpa Aboriginal Corporation rangers had found night parrots on their country.

Safe drinking water for all Territorians 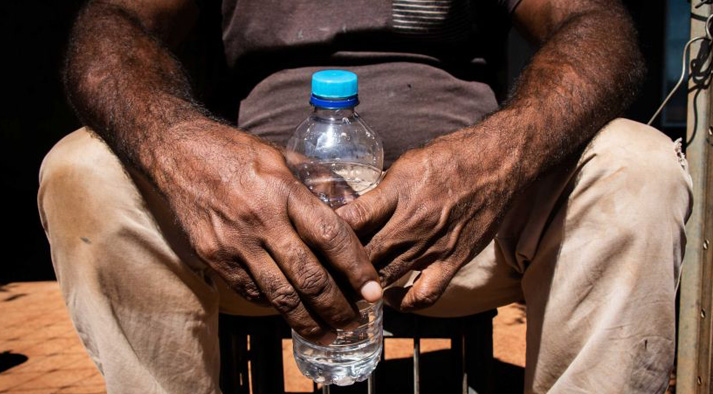 The election saw a big push for stronger NT water security laws. The four Northern Territory land councils united in condemning the ‘unacceptable’ lack of protection for safe and adequate drinking water in the NT.

Water will continue to be a priority for ALEC in 2021 as we work with the Environment Centre NT, Land Councils and Aboriginal Health agencies towards the introduction of a Safe Drinking Water Act to guarantee water security and provide safe and adequate drinking water for all Territorians.

Fund our Future Not Gas 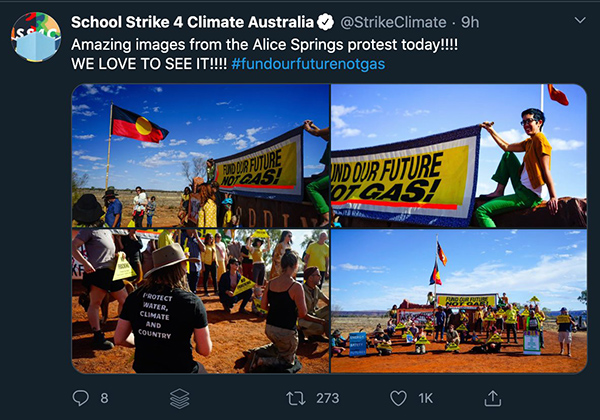 Alice Springs joined more than 630+ communities across Australia to say #NoFracking way to Morrison’s dangerous gas plans as part of the School Strike 4 Climate Global Day of Action. There were actions around the country as thousands of people came together to protect country from fracking and call for climate justice. 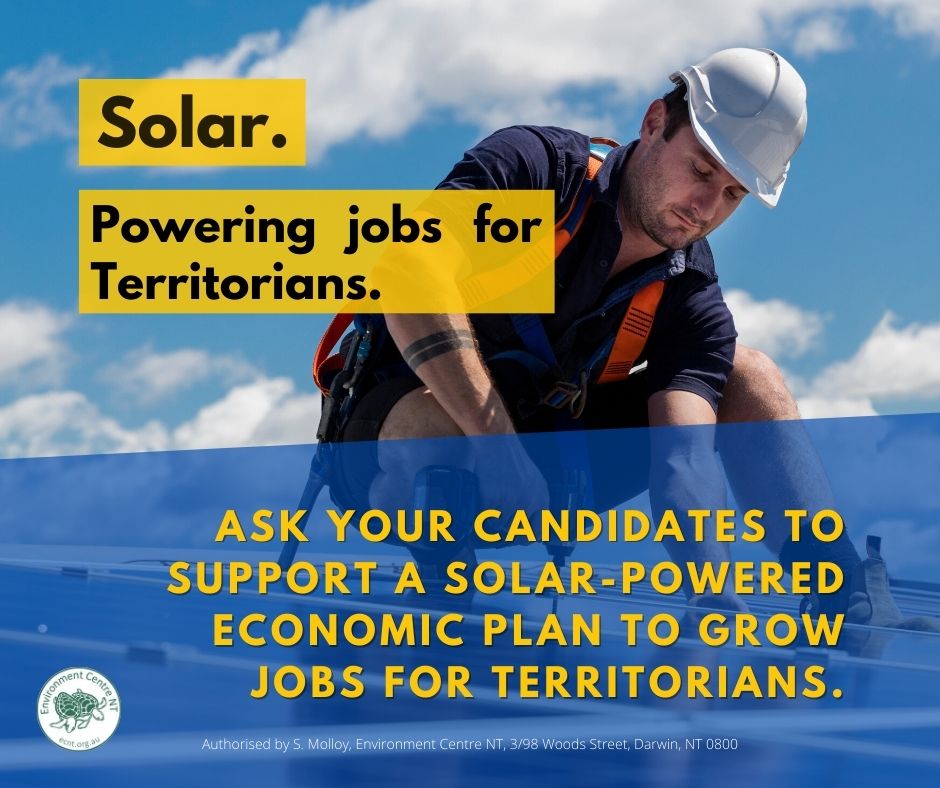 Renewables was one of the most talked-about issues at the Northern Territory Election in August. It was the first time we've seen bipartisan support for renewable energy in an NT election - a result of strong, persistent campaigning. Ensuring the Territory Labour government deliver on their renewables election platform will be a key focus for 2021.

'We can be Buffel Free' film for Indigenous rangers

ALEC worked with the 10 Deserts Project and iTalk Studios to produce this wonderful piece of story telling to help ranger groups and others people across the deserts understand the devastating impact buffel grass on Country and culture and what community members can do to manage it.

Building back a better Territory 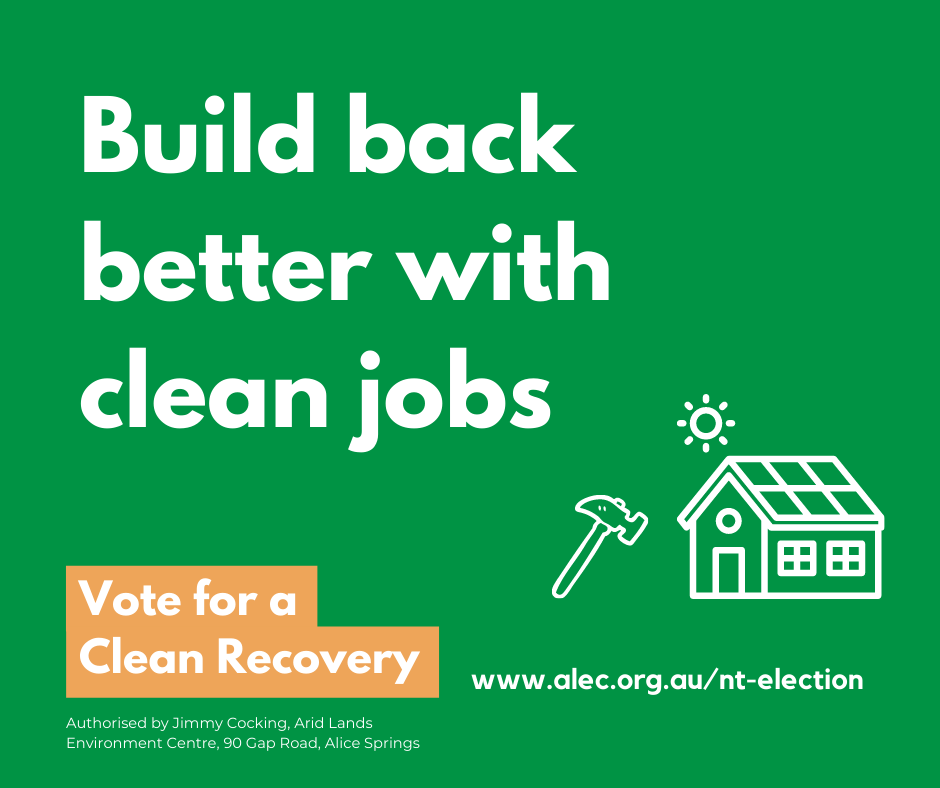 Responding to environmental and social fractures that were exposed during the pandemic, ALEC developed a Build Back Better campaign. We will continue to advocate for an effective, collective response to the crisis that focuses on reducing CO2 emissions, preventing environmental degradation, tackling economic inequality and strengthening our resilience to future shocks.

Our response to the pandemic will determine the shape of our economy and lives for years to come. A climate and nature positive recovery is our chance to repair and rebuild an economy that works for everyone and addresses the climate emergency at the same time. 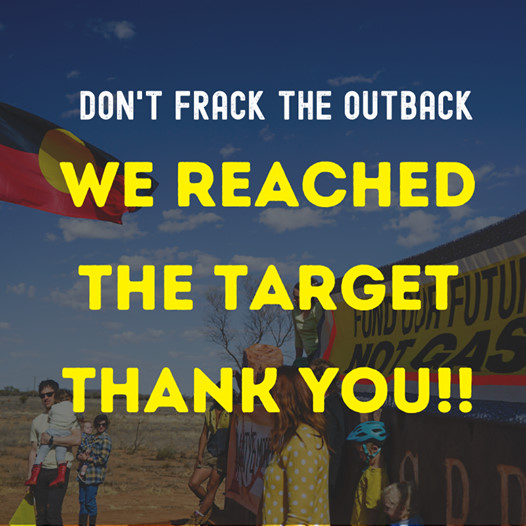 Within just two weeks of launching the crowdfunding campaign, we reached the fundraising target thanks to the generous support of many passionate people determined to see a permanent ban on fracking. ALEC has now recruited a campaigner to work alongside local groups and organisations to lead the local fight against this polluting industry. Thank you to everyone who contributed to support the long-haul fight ahead.
The campaign is still open to donations to help fight fracking in the NT.

Climate, hemp and solar highlights of the 2020 EcoFair 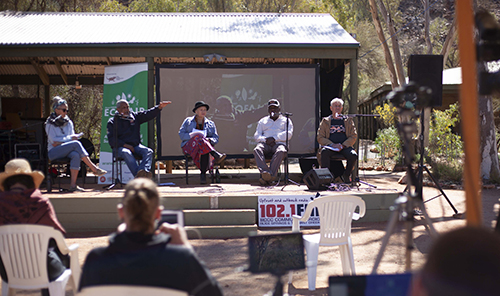 The EcoFair celebrated 12 years of educating, inspiring and activating the community around science and sustainability.  Highlights included a panel with Indigenous leaders on how bush communities are managing climate impacts on Country, a discussion with industry experts about the emerging hemp industry in the NT, a solar tour at the Desert Knowledge Precinct and a workshop with local Garden Gurus and Costa (via Zoom!).

A masterplan for climate resilience in Kintore 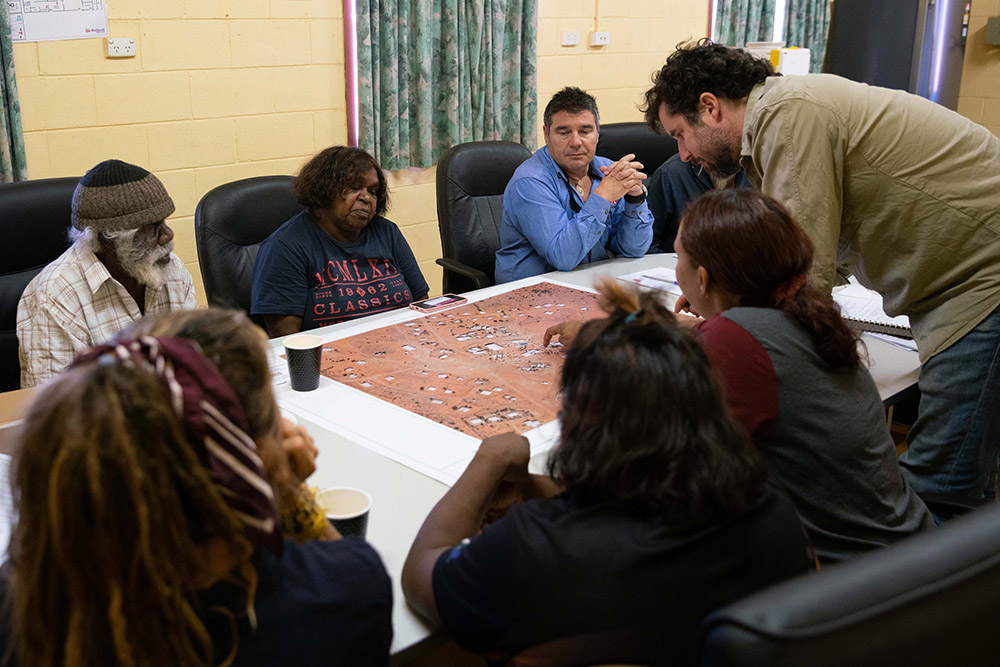 The MasterPlan is designed with people and environment in mind. It outlines low-cost, sustainable landscape design solutions to make public spaces in the centre of Kintore community more liveable in the face of heat, dust and wind. Arid Edge will continue working with Indigenous communities to develop community-supported, sustainable strategies to make them more resilient. 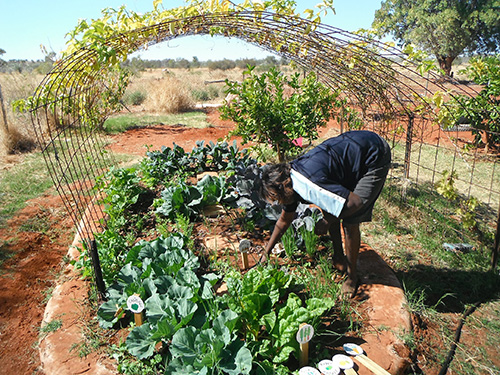 The project started in 2009 in the Utopia Homelands and there are now 13 edible gardens across 10 homelands. In 2020, Arid Edge begun work to build food gardens in seven Town Camps in Alice Springs thanks to a partnership with Tangentyere Council and Northern Territory PHN.

The climate conversation heats up at On the Horizon 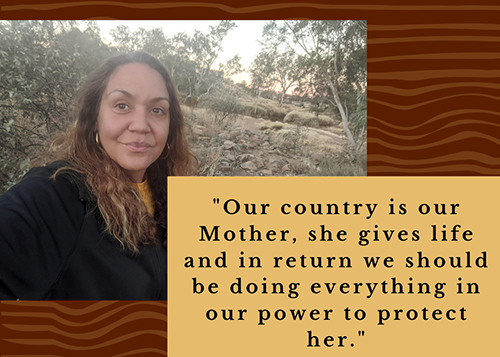 In September 2020, ALEC teamed up with Desert Festival to venture deep on what's possible in a hotter world. This important discussion brought together experts and leaders to explore the impacts of climate change in Central Australia and talk about how we can respond together as a community. 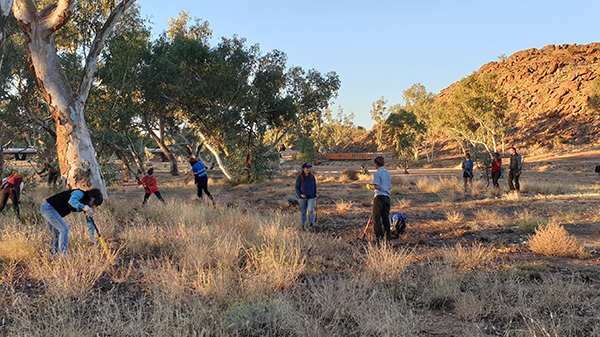 Buffel grass is making a fast-destructive march across Central Australian landscape, literally defacing the land of its complex flora species and changing the natural ecosystem forever. ALEC partnered with Landcare Alice Springs and Olive Pink Botanic Gardens for the annual World Environment Day Buffel Bust to remove this pesky weed from one of our desert region's most cherished and iconic areas, the Todd River. 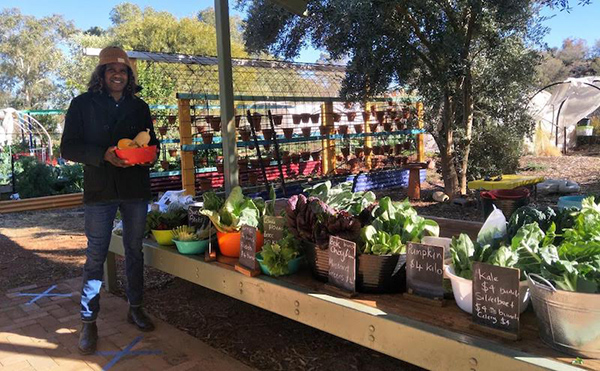 Food for Alice returned in early June follow Covid restrictions, to its new home under the solar pergola at the Alice Springs Community Garden. It started off as one of the biggest in history with more customers and produce than previously. The loan of a coffee machine by Duyu Coffee and a team of volunteer baristas will ensure vibrant Saturday mornings become the norm at the Community Garden and that this social enterprise continues to bring a small but steady income for the Garden. 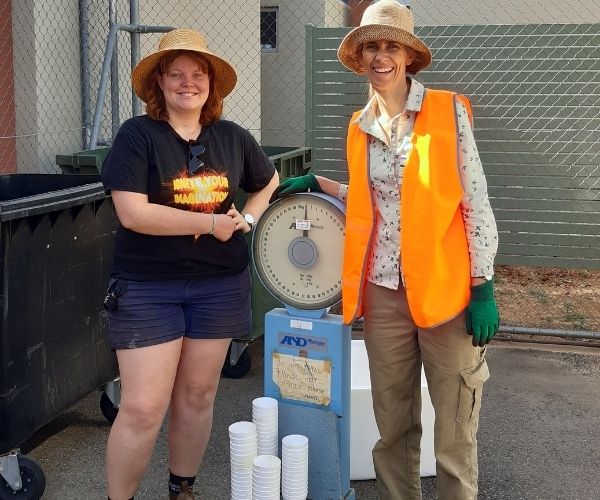 In general, food waste is estimated to contribute between 10 and 15% of a hospital’s waste. Minimising food waste at Alice Springs Hospital (the Hospital) would mean less waste in landfill, reduced greenhouse gas emissions and bring economic savings to the Hospital.  Our research to investigate and benchmark waste generated by the Food Service Area of the Hospital and identify cost-effective waste minimisation solutions will support the hospital in taking concrete steps to reduce waste.

ALEC CEO Jimmy Cocking was part of an online podcast series by Outback Alliance shining a spotlight on how conservation can play a role in the economic recovery effort. Recovery plans for the Outback need to focus on the strengths of the region: the landscape, sun, wind and the people.

Stronger laws for the environment

The hard-won Northern Territory Environment Protection Act was enacted into law in June 2020. The Act will create a new framework for environmental assessment and approval to deliver transparent, accountable and independent environmental decision making. ALEC worked with environmental groups and other stakeholders to strengthen the laws and advocate for progressive, modern and effective environmental protections. The Act is a win for the environment and the community.

A group of scientists, activists, land rights lawyers and conservationists formed ALEC 40 years ago when unchecked mining was threatening the Northern Territory. Today, the ALEC community has grown into a powerful voice for the desert country. The 40th birthday gala event we had planned couldn't go ahead due to the pandemic but ALEC was recognised in a feature in the final edition of the Centralian Advocate.

We hope to event celebrate this milestone with you at a big event next year - so look for an invitation to ALEC's birthday party next July.